Antique Homes In The Lakes Region 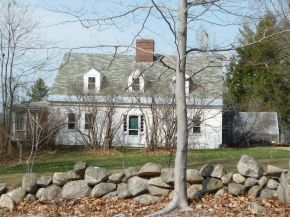 The stone wall surrounding this historic Wolfeboro cape on Warren Sands Road may have preceded the 1780 construction of this wonderful home.

In 1780 when this incredible Wolfeboro cape was built, the stone walls surrounding the property served three important roles: keeping the livestock in (and some out); defining property borders; storing the stone harvested from the fields to facilitate the working of the land (why carry a stone any further than you have to?). When Europeans first settled New Hampshire, it was mostly forested, but between mid 1800s and early 1900s the Granite State was nearly clear-cut. Agriculture, wood products, and wood heat ate up acres of timber. The original wide-pine floors and exposed beams in the Warren Sands Road cape shown here are a testament to those forests. Stone became the natural fencing material alternative...and then it became Robert Frost's favorite neighbor. 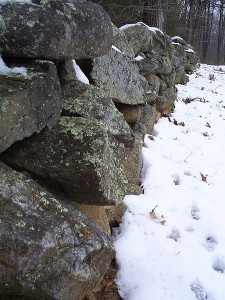 The stone wall Frost refers to in his poem Mending Wall is on the property of his home in Derry, New Hampshire. Similar stone walls can be found all over New Hampshire. Deposited by glaciers and heaved up from the subsoil by centuries of winter frosts, the stones that made up these walls were easy to come by. As most early homes in New Hampshire involved some kind of agricultural activity and many fields had to be cleared, the prevalence of stone walls in this part of the country is not surprising. "That ancient rock was made of minerals that were made from elements that were made from universal mater, that was captured by our solar system during formation of planet Earth. Hence, the story of stone walls begins with the beginning of everything, and ends with the present moment." (from The Stone Wall Initiative) 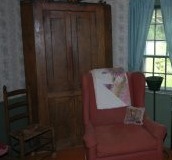 Elements of the Warren Sands cape will connect you with a slightly more recent past: built-in corner cabinets, wainscoting, spiral stairs, two original fireplaces, a three-carriage barn, and 47 acres of fields and woodlands. 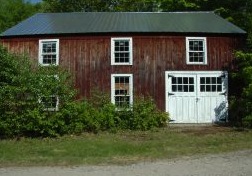 When the house was built, it was just off a major road connecting Wolfeboro to the seacoast area. The road was abandoned a number of years ago, although Google maps still show it as passable. Legend has it that Carol's great, great, great grandmother was an Abenaki Indian who married a white man named Warren, descended from Gen. Warren of the Battle of Bunker Hill. Late fall is an excellent time to view antique homes in the Lakes Region, especially those with stone walls, as there are no leaves to impair the views. For more on the stone walls of New Hampshire, check out the sources listed below, or contact me and we'll look at them together. The Pictorial History of New England's Stone Walls The Granite Kiss Stone By Stone Mending Wall image credit: Wikipedia
Share

As one who has owned two antique homes, one a 1899 Victorian on the Island of Jamestown, Rhode Island, and a 1837 cape and barn in North Wolfeboro, New Hampshire, I can say with authority there is nothing as exciting nor as demanding in home ownership than to restore an old home.

The first things you will notice when entering an antique home that's in close to original condition are the wide floor boards, overhead beams, corner posts, horsehair plaster walls, unique wallpaper, glass windows that bend light in strange ways, beautiful hearths, stone foundations, and where almost nothing tends to be level or square. Once you get past the awe that these antique features bestow upon you, you start to imagine yourself living there and just possibly continuing the stewardship of caring for this special property or working to bring back the antique charm to what someone over 100 years ago called home.

Here in the Lakes Region of New Hampshire, antique homes with charm, beauty, and stories to tell await those who value history as well as making some of their own history. When you purchase an antique home you become part of the story. Essentially you become the caretaker of a very important piece of United States history not to mention preserving local history. The story of your life in that house continues the tradition of owners and will be left for the next owner to create their own story and value what you found so precious living there. This can't be said about many of the homes built in the early 1950's and later, which were thrown up as fast as they could be after World War II and the Baby Boom Generation was born. Antique homes in Wolfeboro, Tuftonboro, Moultonboro, Sandwich, Brookfield, and Alton New Hampshire are available now, to be lived in and enjoyed by people who value history, preservation, and that special feeling of owning something timeless.